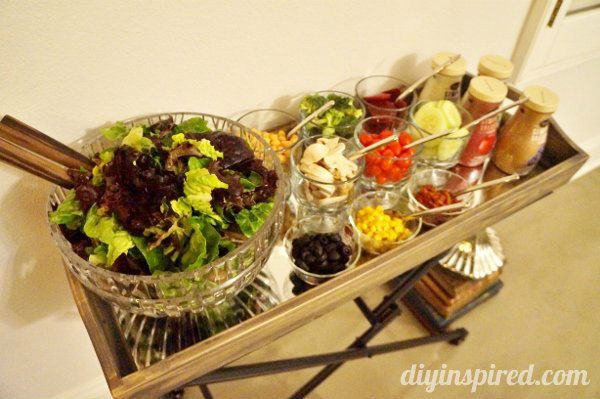 Everyone planning a wedding, birthday, anniversary, birthday party, or any soiree no doubt wants it to be the best ever thrown but that doesn’t mean they have to be over the top expensive.  There are so many ways to cut corners and make your occasion look like a millions bucks even though you were on a budget.  For instance the awesome salad bar we found at diyinspired.com, it is inexpensive but looks amazing!  But, if you’ve got it, then spend it!  Take a look at the 15 most expensive soirees ever thrown via Discount Party Supplies and then check out some great tips on how to save money while hosting your next photo booth party!

15 Most Expensive Parties Ever Held

“They” say that money can’t buy happiness. Unless you’re rich.  Then you can bankroll the kinds of parties that would make Scrooge crack a smile. The following 15 parties were so disgustingly expensive I reckon that even “they” would’ve been happy… had they been invited.

Obama is all about change in politics… and all about dollars for partying. The bubbly must’ve been flowing after the Joint Congressional Committee on Inaugural Ceremonies dropped $1.24 million to host a party in celebration of President Obama’s inauguration.

When Vanisha Mittal and Amit Bhatia“tied the knot” they must’ve used diamond-encrusted platinum links to do the tying.  One Vaux le Vicomte French chateau, 6 days of celebration, 2 wedding vows and a bunch of drunken friends later, and the newlyweds found themselves forking over $60 million for the party to end all parties.

When Elizabeth Brooks became a woman, it helped to have a father selling body armor to U.S. soldiers in Iraq.  Daddy was nice enough to drop a cool $10 million on the bat mitzvah party and even flew in Aerosmith, 50 Cent, Tom Petty, Kenny G and the Eagles. This was, of course, before David Brooks was indicted for fraud and all kinds of other ugly felonies.

When Simon Cowell hit the big 5-0, he decided have a devil-may-care party to burn the date to memory… and a few brain cells in the process. So, he put together a list of 400 friends and family (mostly big-wigs in the entertainment biz) and spent a staggering $2.5 million to keep them entertained.

5. History’s Most Expensive $27.2 Million Party for the Sultan of Brunei

The Sultan of Brunei makes P. Diddy look like a prude. Between bites of caviar and sips of champagne, he was busy singing along to “Who’s Bad” by Michael Jackson (who he flew in for a private concert).  The price tag came to $27.2 million for what has to be the most expensive 50th birthday party.

Balling out of control isn’t a new phenomenon. Back in 1897, Mr. and Mrs. Bradley Martin spent $369,200 ($10 million in today’s dollars) for a little shindig at the Waldorf-Astoria Hotel.  Guests ate like kings, drank like sailors and partied like teenagers on speed… proving that expensive parties existed long before the 21st century.

David Bonderman brought in his 60th year listening to John Mellencamp and The Rolling Stones play live at the Hard Rock in Las Vegas.  Only his friends were invited (or allowed), and Robin Williams played the MC. He ended up spending $7 million, more than a $1 million for every decade he’s been alive.

Some folks party, and some folks party. The Eagles got paid $6 million to perform “Hotel California” (and nothing more) by an unknown benefactor at a private bash in NYC. Heaven knows how much the entire celebration ended up costing the guy/gal.

9. $4 Million to have Christina Aguilera as your Wedding Singer!

Andrei Melnichenko, who made is money in banking and energy, has no qualms burning said money for entertainment. When he got hitched to Aleksandra Nikolic, he spent $4 million to have Christina Aguilera perform at the ceremony.

Marching bands and silkscreen recreations of your apartment might not match your description of a rockin’ birthday party, but Steve Schwarzman thinks otherwise.  He spent his 60th schmoozing at the Park Avenue Armory, admiring the silkscreen and rollicking to Yankee Doodle Dandy… all the while spending $5 million for the festivities.

Don’t let the double black halo or cheesy patterns fool you; Sheikh Mohammed knows how to throw down.  I mean, dude spent $20 million without batting an eye for the opening celebration of his Atlantis Resort in Dubai.  This was a VIP party all the way, with the likes of Michael Jordan and Robert De Niro sipping champagne under a $3 million dollar fireworks display.

12. $1.8 Million to Celebrate a Supermodel’s Birthday

Naomi Campbell stretched her 36th birthday party into a 3 day bash complete with celebs, music and dancing. The happenings went down at Burj Al Arab Hotel in Dubai, and each day had a unique theme (all white, Hip-Hop, Brazilian Samba). The price tag came to $1.8 million, or about $600,000 per day.

It might take a fruitcake to buy this Diamond Christmas Fruitcake. And, no, that isn’t just a gimmicky name; the case is actually encrusted with 223 small diamonds.  The Tokyo-based pastry chef behind this cake is selling it at $1.65 million, and it’s sure to make a splash at some A-list party or another.

Personally, I loved Hot Wheels growing up. But my parents never got me a $140,000 diamond encrusted Hot Wheels car for my birthday… like the one shown above. This one is commemorative of Mattel’s 40th anniversary (the company, not the man).

Got more money than God? Wanna make your kids love you? Rent out the FAO Schwartz toy store for a sleepover party. It’ll run you $38,000 but for the affection of Mommy’s Precious Darling, right?

Now for those of you that don’t have endless funds for your next photo booth rental party there are some ways you can ensure everyone has a great time, while still keeping within your set budget.

Host your get together at off-peak entertaining hours.  Instead of having a dinner party, you can host a cake buffet or a dessert party instead.  This way you get to buy less while still having a get together and enjoying your time with friends.  It’s a win-win!  Hosting a party or shower during the brunch hours is a great way to save time and money.

There are many options for  great food items that you can make in advance when it comes to hosting a  brunch.  Casseroles, quiches, and so much more.  Bacon and sausage can be cooking away in the oven while you are finishing those last minute decorations and will smell oh so good for your guests arrival.  Best of all, most ingredients found in brunch recipes you already have on hand and if not they are very inexpensive to purchase.

Keep your eyes open when you are shopping months before.  In anticipation of your upcoming events you can easily buy and freeze meat, poultry, and seafood whenever you see a good sale.  Same goes for fresh fruits and vegetables; you can pick them up for pennies towards the end of season.  Food and beverages pose the greatest expense when entertaining but if you prepare for these occasions you can save yourself a lot of money!   Whatever you do, don’t expect your guests to provide the food for your party.  It’s great if people offer to bring something, but many find it annoying to have to bring their own food to your event.

Look around your home for décor.  A lot of items you have sitting around collecting dust could be perfect for your wedding or event and not cost you a dime.  You can turn every day items into place cards like, votive candles, pine combs, picture frames, etc.  Simply make a tag or use a printable you can easily find online.

Instead of stocking an entire bar for your guests pick one or more signature cocktails that you can all enjoy while saving a ton of money.  It’s also “refreshing” for guests to have a chance to try something new that they may not make at home.  You can apply the same logic for the kids drinks.  Rather than buying several kinds of soft drinks, opt for making a punch for the kids to enjoy.

Call our Chicago area Photo Booth of the Stars office today at 815-975-8762 and reserve your date!